Chicagoans flocked to North Avenue Beach last Monday for Memorial Day, only to have their holiday fun spoiled when Chicago police closed the beach. For the first time in Chicago’s history, North Avenue Beach, where residents go to cool off, was closed due to excessive heat according to Police Superintendent Garry McCarthy. McCarthy was backed up by newly elected Mayor Rahm Emanuel, who claimed there was a surge in calls due to heat exhaustion, and the reason for the closing was to give ambulances and paramedics easier access to treat those in need. 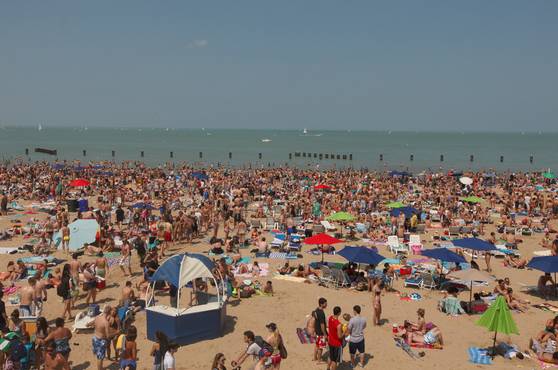 Fox Chicago News lightly covered reasons for the beach closing other than heat, which were missing from other local news outlets, CBS and ABC. Fox reported an unusually high presence of Chicago street gangs.

One resident interviewed by Fox claimed:

Others reported cyclists were actually thrown off of their bikes. Many believe the real reason for the beach closing was exactly this unwarranted violence. Police blogs and readers of local news sites were also quick to respond to what actually happened, and the reports are quite shocking. As many 2000 young teenage “thugs” stormed the beach, in an apparent effort to cause mayhem on those enjoying the hot sunny weather.

“Um folks believe me the heat had nothing to do with this. Its more like the 2000 or so punk teens that showed up around 3pm and started causing problems that led to the closure.”

Local morning radio hosts Don Wade & Roma were quick to cover the story as well, and rightly question what actually happened. Listen as they point out the seriousness of this story, and what appears to be intentional omission by the Chicago mainstream media, leaving out critical information in their explanation for the beach closing.

Wade comments, what may be even more alarming is the fact that the incident was not isolated to Chicago. Drudge Report and other outlets reported Boston, Nashville, Charlotte, Long Island, Rochester, and Miami were among the many other cities that experienced a large up tick in holiday violence on beaches and popular holiday areas. This may have been the result of gang members spreading their message to cause disruptions via social media outlets such as Twitter. Wade goes on to bring attention to another major concern, that President Obama and U.S. Attorney General Eric Holder have began aggressively investigating big city police departments, and their systematic abuses of “civil rights,” such as false arrests and excessive force. Roma demands answers during the segment, and claims that Emanuel’s response to the incidents in Chicago may have been acceptable for a first time occurrence; however, he must come up with better answers and solutions if this problem continues.

Unfortunately, the need for ongoing concern still exists as this type of gang activity continued over this past weekend once again in Chicago. Roving gangs have been appearing in trendy areas downtown, and were responsible for committing attacks against average everyday citizens just this past Sunday in the Gold Coast. CBS 2 reports “15-20 young men between 16-20 years old and black,” approached a man near Northwestern University, one of whom threw a baseball at his face, as the rest proceeded to beat him up.

Wade & Roma picked up this story as well, and went on to mention other reports of gangs and mobs spilling into the streets of downtown Chicago from public city busses and trains. Once in the downtown area, they coordinate attacks against citizens as well as local shops and stores. As they approach a store, a large group will enter, leaving one or two outside to stand guard. Once inside the store, they proceed to steel items and grab what they can, before getting away untouched.

How will Chicago’s new Mayor handle this alarming problem, as we approach the hot summer months? Will he continue the denial of these occurrences, as he did with the beach invasion on Memorial Day? What is the reason for not at least acknowledging the unusual gang presence at North Avenue Beach? Are his hands potentially bound by Obama and Holder, as they attempt to uncover a sinister plot by big city police forces attempting to ensure the safety of average citizens, by supposedly employing systematic racist tactics against real criminals? Surely this is a major test for Emanuel, and he must come up with answers and solutions fast. If this problem remains unaddressed, Emanuel’s recent overwhelming victory may be no different than that of a Chicago athlete, loved by the city one day, and booed out of town the next.